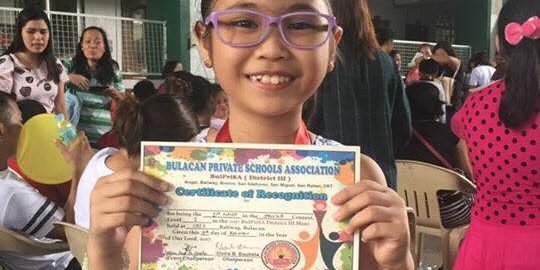 Another gold medal has been given to Montessori De Sagrada Familia as third-grader Anawim Mariekei C. Bona landed with flying colors after being hailed as the champion in Spelling Quiz Bee for Level 1 pupils in the recently concluded Academic Event of Bulacan Private Schools Association (BulPriSA) District 3 Meet held at San Benildo Integrated School Baliwag, Sept. 21.

Bona emerged as the overall champion after spelling 25 out of 30 given words correctly. The young Sagradan managed to compose herself with grace under pressure as she able to withstand the ten-second buzzer for each word which was chosen after a hairsplitting deliberation by all the participants’ coaches.

Moreover, Bona is a consistent winner in the school-based spelling quiz bee every year, bested 47 other pupils from different private schools in BulPriSA District 3 community making her go home with a gold medal.

Mrs. Jennilyn S. Carpio, an elementary English teacher and Bona’s coach who felt happy and blessed, shared that she considered the quiz bee as a learning experience to sharpen the Mariekei’s listening skills, to stay focused while under pressure, to spell and understand the meaning of thousands of words and, to enjoy the contest, and win more friends during the competition.

Furthermore, Carpio shared that her protégée’s fluency in reading and spelling skills has been her key to hitch a sure spot in the top ten of the competition. “Mariekei is a bright student and can easily grasp the correct spelling, meaning, and pronunciation of the words being taught”, she added.

“This smart girl has the burning desire to win. I told her that perseverance is the key plus the complete determination to win. I asked her to stay cool during the and consider that she’ll be competing against the dictionary not with other students,” Carpio ended in an interview.

Bona, together with the 2nd and 3rd placers will represent the District 3 in the forthcoming Provincial Meet this October.

By: Jomar A. Dela Cruz